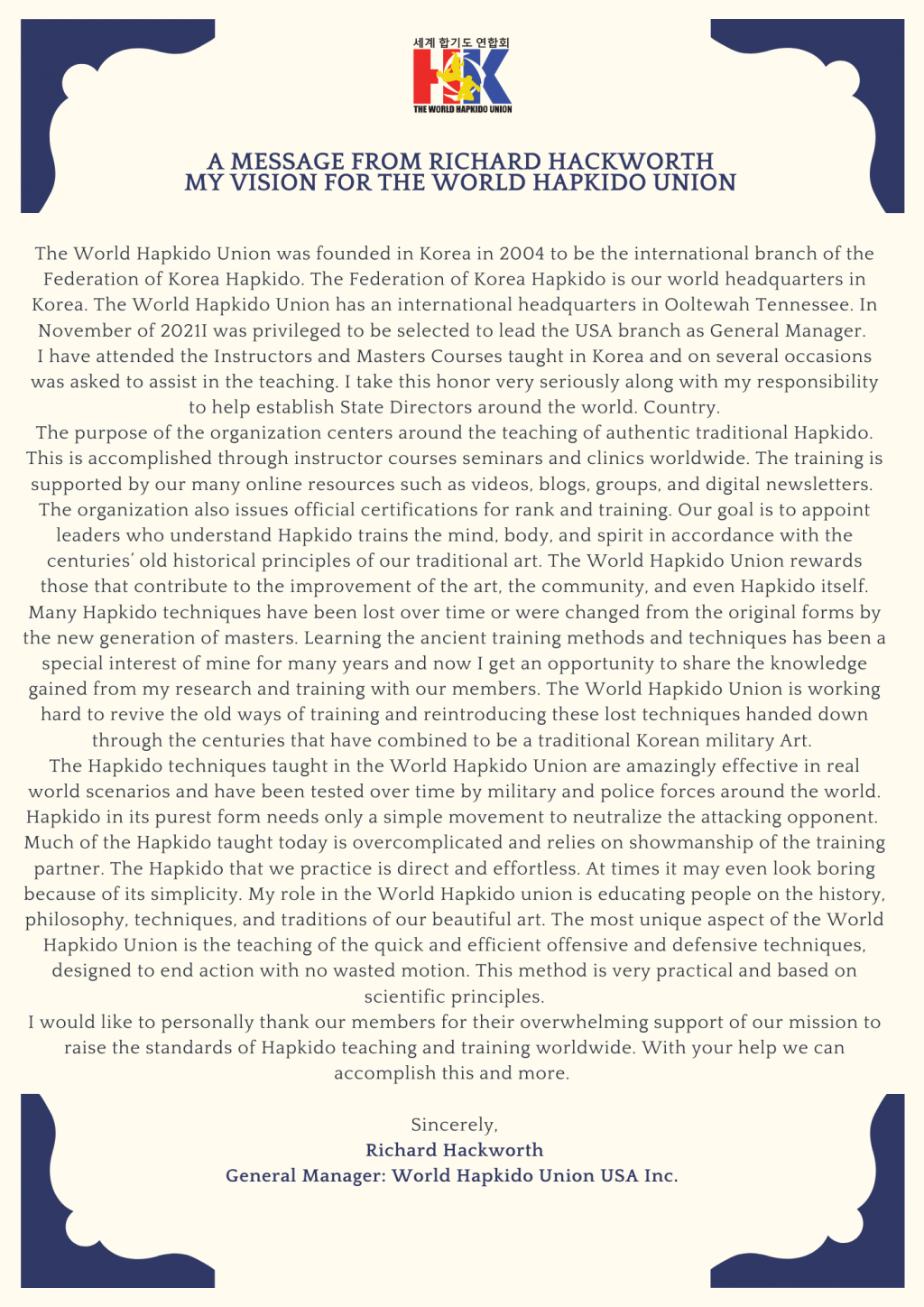 A MESSAGE FROM RICHARD HACKWORTH

MY VISION FOR THE WORLD HAPKIDO UNION

The World Hapkido Union was founded in Korea in 2004 to be the international branch of the Federation of Korea Hapkido. The Federation of Korea Hapkido is our world headquarters in Korea. The World Hapkido Union has an international headquarters in Ooltewah Tennessee. In November of 2021I was privileged to be selected to lead the USA branch as General Manager.

I have attended the Instructors and Masters Courses taught in Korea and on several occasions was asked to assist in the teaching. I take this honor very seriously along with my responsibility to help establish State Directors around the world. Country.

The purpose of the organization centers around the teaching of authentic traditional Hapkido. This is accomplished through instructor courses seminars and clinics worldwide. The training is supported by our many online resources such as videos, blogs, groups, and digital newsletters.

The organization also issues official certifications for rank and training. Our goal is to appoint leaders who understand Hapkido trains the mind, body, and spirit in accordance with the centuries’ old historical principles of our traditional art. The World Hapkido Union rewards those that contribute to the improvement of the art, the community, and even Hapkido itself.

Many Hapkido techniques have been lost over time or were changed from the original forms by the new generation of masters. Learning the ancient training methods and techniques has been a special interest of mine for many years and now I get an opportunity to share the knowledge gained from my research and training with our members. The World Hapkido Union is working hard to revive the old ways of training and reintroducing these lost techniques handed down through the centuries that have combined to be a traditional Korean military Art.

The Hapkido techniques taught in the World Hapkido Union are amazingly effective in real-world scenarios and have been tested over time by military and police forces around the world. Hapkido in its purest form needs only a simple movement to neutralize the attacking opponent.

Much of the Hapkido taught today is overcomplicated and relies on the showmanship of the training partner. The Hapkido that we practice is direct and effortless. At times it may even look boring because of its simplicity. My role in the World Hapkido union is educating people on the history, philosophy, techniques, and traditions of our beautiful art. The most unique aspect of the World Hapkido Union is the teaching of the quick and efficient offensive and defensive techniques, designed to end action with no wasted motion. This method is very practical and based on scientific principles.

I would like to personally thank our members for their overwhelming support of our mission to raise the standards of Hapkido teaching and training worldwide. With your help, we can accomplish this and more. 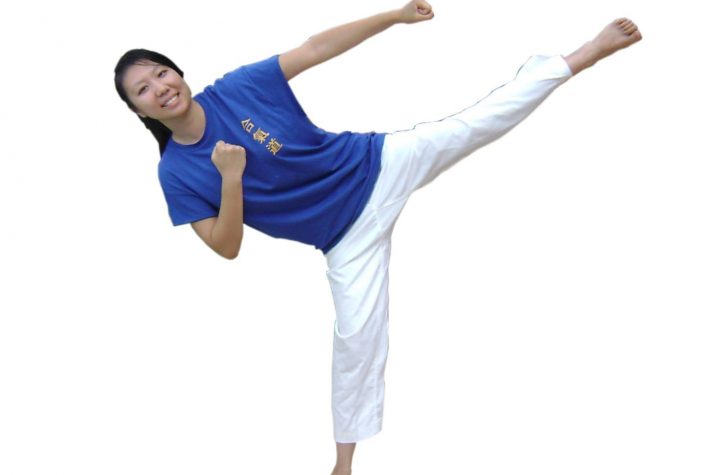 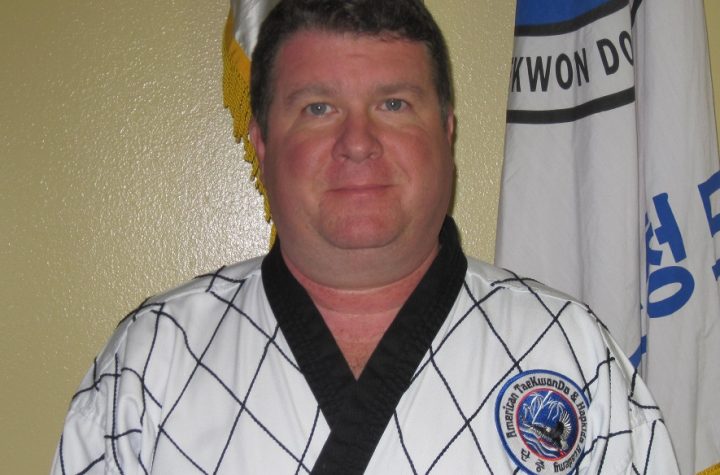 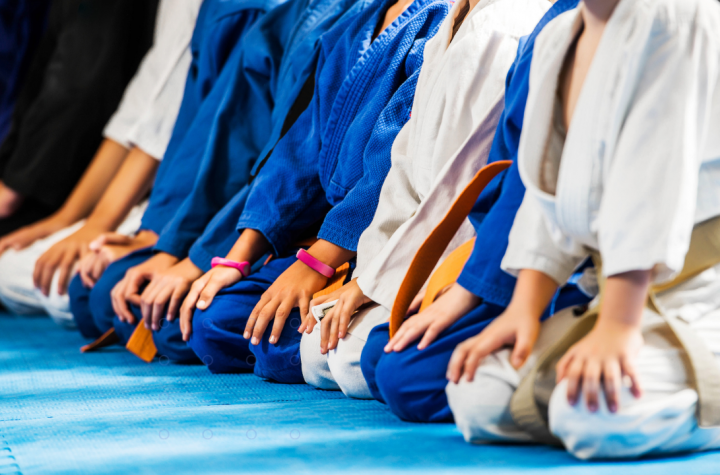 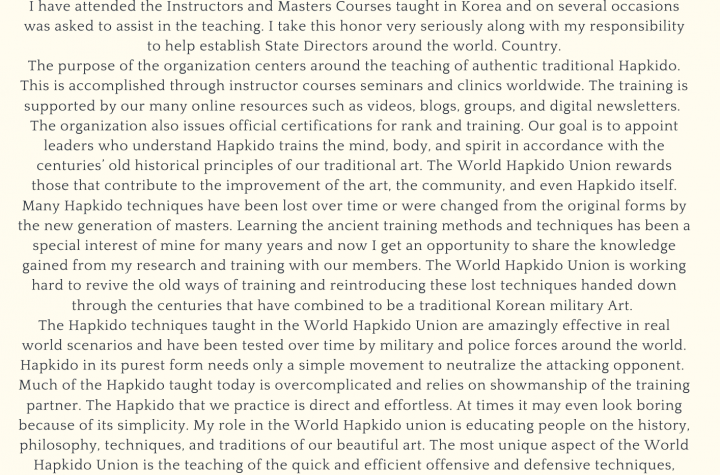